The Flagship Diner in Briarwood and I were born a year apart – me in ’64 and it one year later. Now, I’ve improbably outlived my local diner.

A yellow bulldozer sits parked outside it, waiting like a Japanese movie monster to smash away at the glass booths, the pink leatherette seats, the faux marble flooring, and the memories of several generations in this typical neighbourhood.

A neighbourhood where a fleeting visit by Rod Stewart and some glamourous bandmates in the 70s to the local playground, as well as our own version of Ringoliveo, remain among the very few claims to fame.

The Flagship was the special place where normal people marked special stuff: a daughter’s junior high school graduation; the championship of a local Little League team; the finalisation of Bah Mitzvah preparation; a return from US Army basic training. Eggs and events; mugs and milestones.  https://www.youtube.com/watch?v=XXRTte3xk_A

It was both where you took first girlfriends and wives broke up with you. You wanted everybody to see the first; she stayed safe from a scene with the second.

And now it’s gone. My Australian son, visiting the neighbourhood with his own girlfriend and both tenderly looking after his Ukrainian grandmother, drops a hint for me to go steal the diner’s nautically-themed signage. It’s a big fence, though, he gently reminds me. I think of the ship’s helm, the cycle of life, and the Buddhists’ Eight Fold Path.

I think of Queens. Tattered, worn, a bit lumpy but still good to go – like a baseball with too many innings on the dirt sandlot and no new balls available in the catcher’s kit bag.

I think of grief and its stages – the shock, the sadness, and the anger. How we lash out at loved ones sometimes as we miss other loved ones, as I regretfully did on my own father’s passing.

I think – perhaps too naively – that’s what America is doing right now too. Somehow, through uncertainty of her place in the world and uncertainty in the future of her citizens, she lashes out.

In angry Senate hearings. In angry social media shouting. In angry car horn blasts at the lights. In angry shootings of innocents by the somehow maligned using malicious military-grade weapons.

I want to be angry too. About the developers who ended the lease the Greek family had on the Flagship. About the Dunkin Donuts swallowing our street corners. About seemingly politically partial and insensitive men being appointed to one of the world’s most genius examples of social infrastructure. About a President who daily uses that most modern means – the Tweet – to digitally flatulate at the historical foundations on which this profoundly complex country has always sat. About persistent poverty amongst rising riches.

So, I woke early this morning. The box-like brick house with the leaky roof asleep. Suzi, my patient wife, still and settled even as I stumble around for the palaver of the day – keys, wallet, phone, laptop, specs. Even asleep, I make out that she lovingly knows that I seek some solace. Tim and Wendy who will rise to another day of youthful limitlessness – whether its colourful cooking, tremendous treks or new plans for study and life. My mother, Nadia – a survivor of war, hardcore psychiatric wards, a burning South Bronx, and now her two hip replacements in six months – who will rise to the very real limitations of body and time.

I walk out the door to the rental car and I go in search of a new diner as the new day dawns. A place where two retired lesbian schoolteachers kiss the owner’s son, their former student at the public school, on entering. A place where ABBA’s “SOS” comes soothingly across the speakers in the ceiling. A place where the main conflict is a ritualistic one between resigned and long-suffering Mets fans and bold and brash Yankees fans – each finding something oddly admirable in the other even though they’d never change stripes. A place where people recount the day’s tasks and chores ahead – the vehicle registration, the dropping off of an old air conditioner, the checking in on an elderly neighbour – and are greeted with a knowing “yeah, it never ends.”

Such is The Classic Diner – truly classic – a few miles from my own ‘hood and over in Richmond Hill. A universe away in my youth; a youth now a universe away itself.

But, if there is to be a defence, then let it be that it’s also possible to deny the pattern while picking the detail. 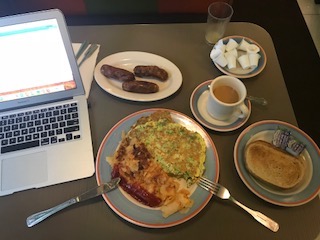 Indeed, anger isn’t an inheritance, requirement or a condition. It’s a choice and I today choose differently. I choose a broccoli and cheddar omelette, a kind smile from my Latina waitress, and an exit “thank you” from the proud Greek owner in his pressed short sleeve business shirt.

It’s morning in my tiny piece of America.

Pete Shmigel is a Sydney-based writer of essays, poems and short stories, who has professionally worked in politics, mental health, and recycling. He was born and raised in New York by refugee parents from Ukraine. View all posts by petershmigel

One thought on “On the death and discovery of diners, and anger in America”